Reflecting on my Son

My son, Chase, goes back to college this Saturday to begin his second semester. As I reflect on the past 19 years I am astounded at how quickly it went. 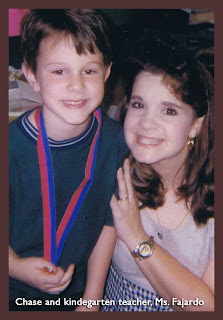 It seems like yesterday when I walked him into Mrs. Fajardo's kindergarten classroom. I remember how grown I thought he was that day. He was happy to start school, while it took everything in me to hold back the tears until I got to the parking lot. That day long ago has been on my mind all week. Each time that I see a little boy, it makes me gasp at how quickly my time with Chase went.

Watching my child grow into a man gives me great honor in being his mom. I know that while I played a part in his upbringing, I can't take all the credit. My parents and sister had a large influence in his life. The bond that he has with my dad is oak strong. There have been many people in our life that have contributed to the man Chase has become. Mr. Brian - his Sunday School teacher, Bro. Barry - our former pastor, his high school history teacher, along with a slew of friends and family. All of these people have lent their time to be a piece of the fabric of his life.

Chase is my oldest child and as a first child myself, I've always felt like I identified with him on many levels. My biggest hope was that he would be nothing like me. I was always introverted and hard on myself. I tried to please everyone and wanted to do everything perfectly. As I observe Chase, I see many of those traits that I had hoped would escape him. But, after thinking about it, I've realized that those traits are also what gives him tremendous compassion for others. It gives him drive to reach goals and it helps him to be humble. While Chase may be a lot like me, his individuality shines. His intellect far surpasses my own and he has a sense of loyalty and honesty that is rare today. His heart and soul shines with a funny mix of sarcasm and wit that balances out the seriousness that he carries. I respect Chase for rising to meet new challenges. He didn't always have any easy time. There were times that I made poor choices for him. Our family unit wasn't always a healthy place to be, but Chase didn't use that as an excuse. He used it to become stronger. His inner strength pushed him to rise above. My heart bursts with pride in knowing that he is a young man of solid character. 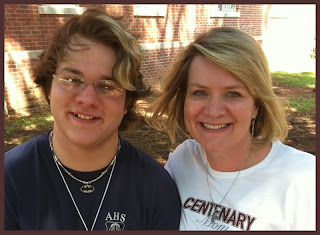 Reflecting on my son fills me with pride, happiness, love and hope for his future.

Thank you Chase for being an awesome son!

What started as an experiment . . .

Social media is so much fun and consumes a large part of my life. The list of sites that I have joined is extensive. I am a fan of the obvious Facebook, Twitter, Four Square, GetGlue, and of course the latest, Google+. I often hear people voice worry over the idea of "checking in" on these sites. I've been warned about the dangers of home theft and of course stalking issues. I can't say that it's ever deterred me from earning my Four Square badges or loyalty discounts.

A few weeks ago, my daughter's step-mom, Nicole (who happens to be my friend), invited me to spend a week of "girl-time" on the beautiful beaches of Florida for some relaxation time. I really wanted to go, but did not commit. The girls arrived in Florida on Monday and each day they begged me to come. I continued to say no. Since my daughter had left the week before to spend a school year with her Dad and Nicole, I really started missing her. I decided that I would show up as a surprise. I did not know where the girls were staying in Florida, but if I asked for directions it would spoil the surprise. I noticed on Nicole's Facebook page that she checked in when they arrived at the beach. The check-in even included a map. It made me wonder if I would be able to find them on the beach based on the check-in. So, my experiment began.

I hit the road on Friday morning using the check-in location to plug into my iPhone Google Map. 9 hours and some minutes later I arrived in Ft. Walton Beach. I pulled into one of the condo parking lots on the Santa Rosa Boulevard and walked out to the beach. Using a photo that my daughter had taken earlier in the day of her sister, I was able to find the condo building by matching the balcony similarities. I knew that I would find them on the balcony because I called a few minutes before my arrival and was told they were enjoying the view. The first thing that I did was post a picture on my Facebook wall of the beach with a caption "I love the beach" and tagged both Nicole and my daughter, Laura. After a few highly anticipated seconds I had no response. Can you imagine . . . seconds going by with no response on a Facebook post? (HA!) It took me about 5 minutes to spot my daughter on the seventh floor balcony. Yelling her name from the white sands below, she waved back at me like it was no big deal. 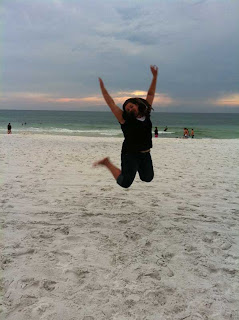 Within seconds she realized it was me and let out a "Mommy!" that made me happy that I had made the drive. She ran, no I think she flew, down the stairs within a matter of seconds and literally knocked me to the ground with a hug. She almost made me drop the bottle of wine that I had brought for Nicole from a Louisiana vineyard. That would not have been good! 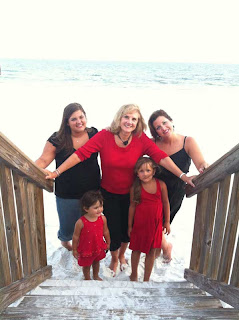 As I was talking with a very shocked Nicole, we both were not sure if we should be happy that I found them or a little bit scared. Although social media is hip and cool or whatever the "in" word might be, I guess the value of the "check-in" is one to be considered carefully. I knew that I could have just as easily found the girls by making a phone call, but it was so much more fun to drive across several states thinking of ways to surprise them. I spent the week sunning in the beautiful 91 degree weather, while reading tweets and posts about the 107 degree heat back at home. It was a great girls week that started as a fun experiment.
Posted by Social_Robin at 11:56 PM No comments: